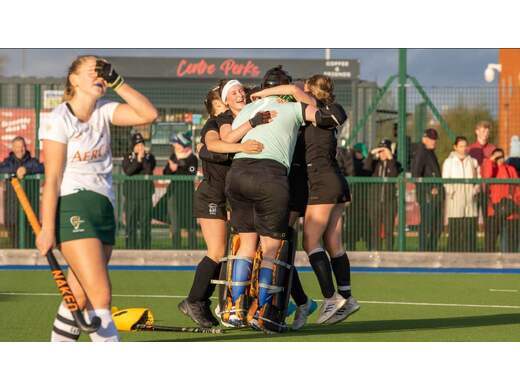 Double Victory for Connacht in Athlone

Round 3 of the InterPros saw Connacht u16s and u18s take on Leinster South in Athlone on Sunday the 30th of October. In two tense encounters both matches followed a remarkably similar script. In both encounters, Connacht took the lead only for Leinster South to strike back, with both games ending 1-1. Thus, each match had to be settled on a shuttles shootout. Shuttles are always a tough way to settle a match, but on this occasion Connacht came out on top in both shootouts.

Quarter four began with the Connacht girls hoping that this would be their day, but there is no such thing as an easy InterPro game, and full credit to Leinster South, they came out in the final quarter determined to spoil the Connacht party. It was a tense quarter and Leinster South eventually got the score their play deserved when no. 19, Charlotte Foley (Kilkenny HC), made a run into the circle and finished with an excellent knee high flick past the Connacht defence. With only minutes remaining Connacht kept cool heads and had a chance to steal it at the end with a penalty corner. Unfortunately, they didn't convert and the game ended 1-1.

Connacht were first up in the shuttles and Aoife Purtill (Athlone HC) made no mistake, coolly slotting home to the left of the Leinster South keeper. Despite this early pressure, Leinster South responded perfectly with a well taken shuttle. 1-1 after one and all to play for. Aóibhin Deasy (Greenfields HC) stepped forward and slotted home again to the keepers left. The first slip-up came next, with the Leinster South effort going left and wide. 2-1 after two, advantage Connacht. Connacht’s Mia O’Donnell (Greenfields HC) went third but her effort through the keepers legs was deflected right and wide. Leinster South now had the opportunity to level the score. However, the shot went right and wide. It remained 2-1 after 3. Round 4 saw Connacht capitalise on its advantage when Co-Captain, Mia Rodgers (Kinvara HC) deftly placed the ball past the Leinster South keeper. Now Leinster South needed to score to stay in the contest. However, Connacht keeper, Emma Considine (Kinvara HC), pressured the Leinster South no.10 and her shot went to the right of the goal and wide. The Connacht squad exploded with delight as they notched up their first win of the campaign. In fact, for the entire u16 squad, this was their first every victory at InterPro level and they celebrated accordingly.

With the Connacht u16 camp in high spirits, u18 head coach Deirdre McDermott kept her charges firmly focused and they went through their warm up routine. From the start, the u18 game was an intensive and finely balanced affair. With both teams playing excellent hockey it was clear, at least to neutral observers, that this encounter could go either way. With play going from end to end, it only seemed like a matter of time before one team would find the opening the score. Indeed, Connacht keeper, Maebh Gilmore (Yeats County HC), set down her marker for the day with an excellent outstretched save that just knocked the ball off its path to goal and into the relative safety of the stick of fellow club mate Sophie Swann. Like the earlier u16 encounter, half-time saw the teams head to the side-line with the score remaining 0-0.

The third quarter continued where the previous two had left off and the spectators were all wondering who was going to break the deadlock first. That answer came in the 50th minute when Connacht scored a field goal via some excellent team play. The attack began when Sligo native Maebh McLoughlin (Pembroke HC) fed the ball into the circle from the right side of mid-field. The pass found Laoise Medley (Galway HC) who passed it on to Saoirse Lawley (Yeats County HC) who in turn picked out Grace Walsh (Galway HC) who had worked her way to the penalty spot. Keeping a cool head and under pressure from the Leinster South defence Walsh slipped the ball to the keepers left and into the bottom right corner. As with the u16 game, the score at the end of the 3rd quarter was 1-0 for Connacht.

As expected, the final quarter saw no let-up in intensity. With the game edging into the final minutes Leinster South pressure won them a penalty corner. As the corner played out Connacht broke the line and now had to defend with just three defenders. In the subsequent re-take, Connacht defended the shot at goal but did so at the expense of conceding another PC. As it was a reset, Connacht had to defend with three defenders. This time Leinster South made no mistake and executed an excellent drag flick, knee high to right of the goal. 1-1 with only minutes remaining and shuttles beckoning, this time it would be Leinster South that would have the last opportunity of the game with a PC. However, like Connacht in the u16 game, they failed to score and the game ended 1-1.

Unlike earlier, Leinster South were first up in the shuttles and after managing to beat the Connacht keeper the Leinster South shot hit the post and rebounded away from both the goal and the Leinster South player. First up for Connacht was Captain, Lauren O’Donnell (Greenfields HC) and she needed no second invitation to set the advantage in Connacht’s favour after round 1. Remarkably, it would be both keepers that determined the outcome from that point on. Gilmore saved the next Leinster South effort to keep the advantage marginally to Connacht. Laura Swann (Yeats County HC) stepped up to attempt to press home the advantage, but her effort was saved by the Leinster South keeper. Round 3 would prove similar. The Leinster South player went left and drew an excellent outstretched save from Gilmore who somehow managed to hook the ball away with the head of her stick. This time it was the turn of Saoirse Lawley to try and press home the Connacht advantage, but her attempt was also saved. It was proving to be a good afternoon for both keepers. Round 4 was similar, Gilmore saved and Ellie Brown’s (Greenfields HC) effort was also saved. Thus, Connacht held the slender advantage of being one up heading into Round 5. Leinster South needed to score and although the player got her shot away, it was only after she had been guided wide by excellent goal keeping from Gilmore. In agony for Leinster South the ball clipped the outside of the right post and went harmlessly wide. Queue celebrations from the Connacht squad as they revelled in their first win of the InterPro season.